FOSSILERA
MINERALS
FOSSILS FOR SALE
NEW
CRYSTALS
ABOUT
Minerals & Crystals
Sulfur
Sulfur is an abundant and important mineral on our planet. The chemical composition of this vibrant mineral is S8, meaning 8 sulfur atoms bonded together to form a sulfur molecule. The crystal structure is typically tabular or as blocky dipyramids that often form in sedimentary rock. When burnt, it produces a blue flame and releases an odor that resembles rotten eggs.
7 Items ($19 to $45) 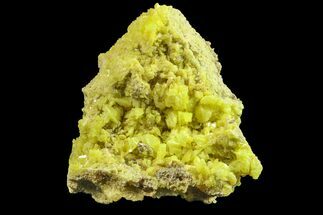 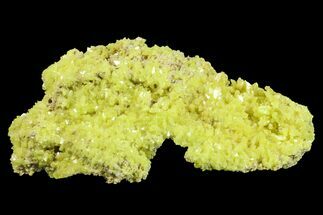 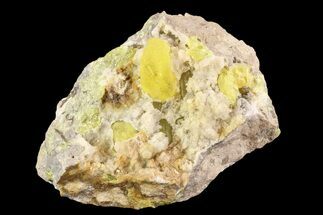 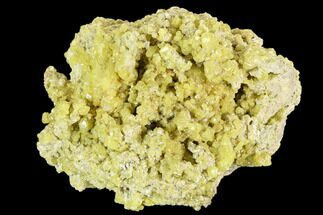 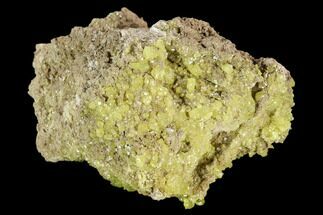 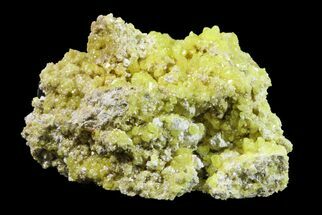 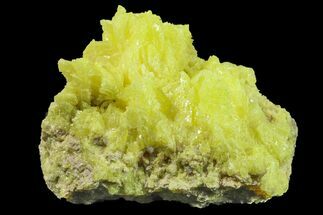 Where Can Sulfur Be Found?

Sulfur is an extremely abundant mineral that is found throughout the lithosphere. It can be found in areas of volcanic activity (modern or historical), sedimentary rock, as well as included within the chemical composition of various metallic minerals (sulfides).

Sulfur is the third most abundant mineral in our bodies, and can also be found within every living organism on this planet. In fact, sulfur remains when a body is fossilized, partially explaining the prevalence of sulfur in fossil fuels.

Sulfur crystals can form from volcanic sulfur springs like those from the El Desierto Mine of Bolivia, and can also be found as an alteration product of sulfide (compound containing one or more S^2- ions) minerals. Most often native sulfur is found in sedimentary rock or as a powdery yellow coating without large well defined crystals.

Sulfur crystals without impurities are yellow and crystallize in the orthorhombic system. When impurities are present, this can alter the color that the crystals display. The crystals are most often very light and soft, scratching at 1.5 - 2.5 on the Moh’s scale of hardness. They’re naturally brittle, however become more brittle when heated. In moist or humid environments sulfur can deteriorate easily, meaning storage or sulfur crystals specimens should occur in dry locations. Washing the crystals with water can also lead to deterioration of the specimen, therefore this is not suggested either.

Most people associate sulfur with the smell of rotten eggs, however pure sulfur doesn’t have an odor. The odor occurs when sulfur becomes a compound. For example, when sulfur mixes with water it produces hydrogen sulphide gas.

Sulfur and sulfate are both non-toxic, therefore holding a sulfur crystal specimen should not pose any health risks. However, sulfur in the form of carbon disulfide, sulfur dioxide and hydrogen sulfide, is toxic.

Either spelling is considered accurate and both are relating to the same element. In Britain, “sulphur” is the most widely used spelling. The origin of the word sulfur is said to be from the Sanskrit word “sulvere”, meaning “sulfur”.

What Is Sulfur Used For?

The history of the usage of sulfur dates back to ancient times when many cultures used it for a variety of different applications. In ancient Egypt, sulfur was used in an ointment to treat granular eyelids. In ancient Greece, sulfur was burnt for the process of fumigation. In Sicily, sulfur was used for both preserving wine and bleaching cloth. In China, alchemists experimented with sulfur for use in matches, weaponry and explosives. Sulfur is also mentioned multiple times throughout the Bible, though it’s referred to as “brimstone”. These are just a few brief examples of sulfur application throughout history.

While sulfur still has diverse modern day functions, in many cases they’re much different than ancient applications. Nowadays, sulfur is used to produce acids (sulfuric acid and phosphoric acid), as a fungicide, in fertilizers, as an indicator in some gases, used in black powder and is used in the production of black rubber. There are also studies underway to make a stable source of plastic primarily out of sulfur, some of which have been successful.