Fossils
Dinosaur Fossils
HERE ARE SOME OTHER SIMILAR FOSSILS FOR SALE 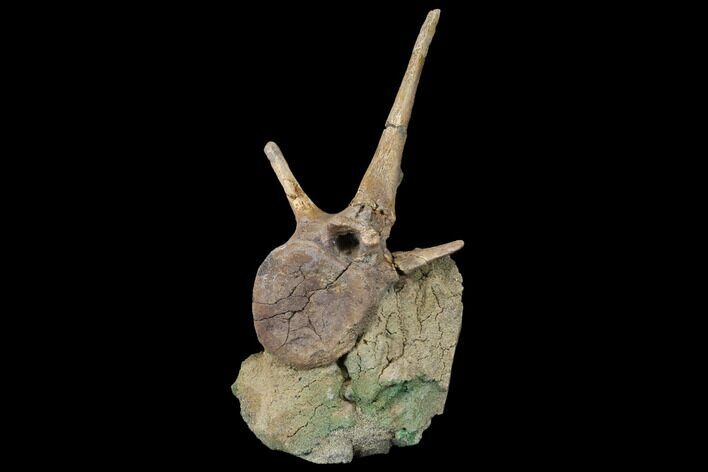 This is a nicely preserved, caudal (tail) vertebra of the ornithopod Thescelosaurus with intact processes. This vertebra was collected from the Upper Cretaceous Hell Creek Formation of Glendive, Montana. There are repaired cracks through each of the processes. The centrum of the vertebra has fractures, however there is no indication of any repairs to it. The rock that this vertebra was found in is still partially attached and has been cut flat at the base, acting as a unique display stand.

Thescelosaurus was a small ornithopod dinosaur that appeared at the very end of the Late Cretaceous period in North America. The preservation and completeness of many of its specimens indicate that it may have preferred to live near streams. This bipedal ornithopod is known from several partial skeletons and skulls that indicate it grew to between 2.5 and 4.0 meters (8.2 to 13.1 ft) in length on average. It had sturdy hind limbs, small wide hands, and a head with an elongate pointed snout. The form of the teeth and jaws suggest a primarily herbivorous animal.