Fossils
Reptile, Amphibians, Synapsids Fossils
HERE ARE SOME OTHER SIMILAR FOSSILS FOR SALE 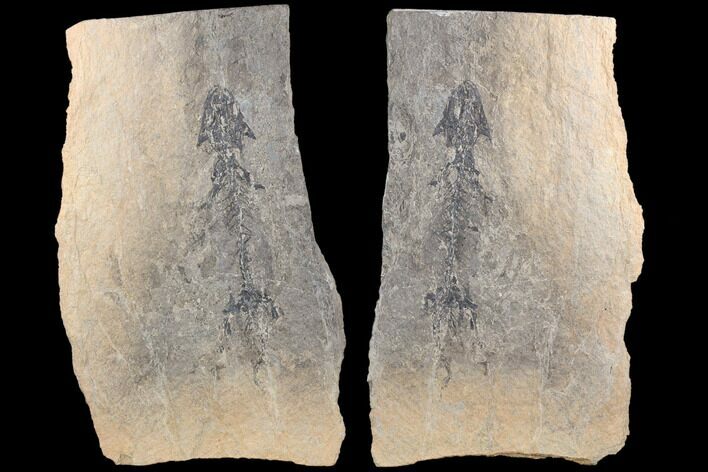 This is a rare, 8.5" long Discosauriscus from the Early Permian deposits of the Czech Republic. It was a perfect, positive, negative split with both halves included. The skull, vertebrae column, ribs and parts of the limbs can easily be seen. This piece comes from a locality which has been off limit to collecting for many years.

No repair or restoration. Comes with a pair of display stands.

Because the skeletons of Discosauriscus were lightly sclerotized, they are rarely as well preserved as the intact specimen found on this plate. This fossil clearly defines the wide jaws, short limbs and relatively long tail of this species. A well preserved lateral-line system has been described, by researchers which suggests that Discosauriscus may have had electroreceptive organs.

Discosauricus was a small seymouriamorph that lived in Central Europe during the Lower Permian Period. Many seymouriamorphs were terrestrial or semi-aquatic. However, aquatic larvae bearing external gills and grooves from the lateral line system have been found, making them unquestionably amphibians. The adults were terrestrial. Some of the best fossils of Discosauricus species have been found in Boskovice basin in the Czech Republic.
SOLD
DETAILS
SPECIES
Discosauriscus (Letoverpeton) austriacus
AGE
Early Permian