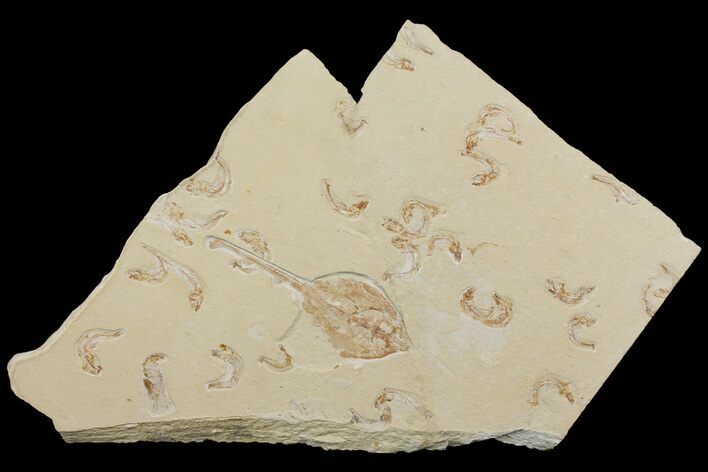 This is a really awesome mortality plate from the Upper Cretaceous, marine deposits near Byblos, Lebanon. It features a 7.7" long guitar ray (Rhinobatos) along with over 30 fossil fish (Gaudryella) and shrimp (Carpopenaeus). The entire slab of limestone measures 23 x 15" and has been backed for stability. There is one repaired crack running through the center of the rock.

It comes with a display stand but we can also add a wall hanger upon request.

The genus Rhinobatos still exists in our seas, in the tropical and hot temperate regions, and includes about 30 present day species. There are eight described species of Rhinobatos from the Lebanese deposits with Rhinobatos whitfieldi being one of the smaller ones.

A photo of one of the quarries at Hjoula, Lebanon
FOR SALE
$1,595
DETAILS
SPECIES
Rhinobatos, Gaudryella & Carpopenaeus
AGE
Upper Cretaceous (~94 Million Years)