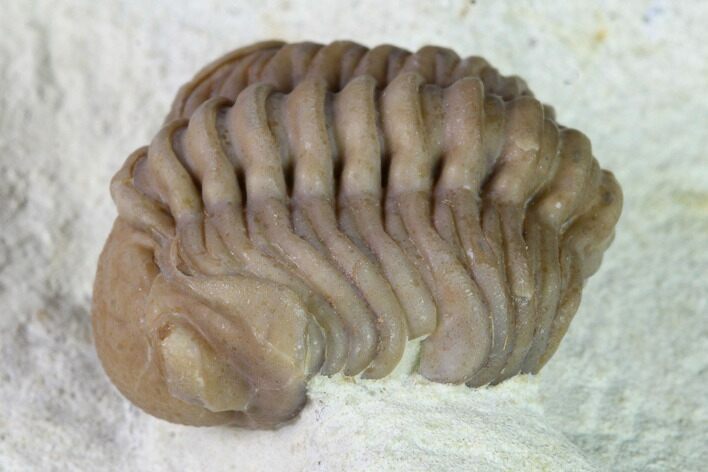 This is a curled, 1.4" long (if outstretched) specimen of Paciphacops campbelli from the Haragan Formation of Oklahoma.

It has amazing surface detail including the many eye facets preserved in each eye. It was prepared under microscope using air abrasives.

There is a second very similar species found in the same layers called Kainops. The most easily identifiable, distinguishing feature is the number of eye facets. Kainops has substantially more eye facets than Paciphacops does. Paciphacops seams to be the scarcer of these two phacopids, but that might depend on the specific layer being collected.

Trilobites were a very diverse group of extinct marine arthropods. They first appeared in the fossil record in the Early Cambrian (521 million years ago) and went extinct during the Permian mass extinction (250 million years ago). They were one of the most successful of the early animals on our planet with over 25k described species, filling nearly every evolutionary niche. Due in large part to a hard exoskeleton (shell), they left a excellent fossil record.
View All Black Cat Mountain Trilobites For Sale
More About Trilobites
SOLD
DETAILS
SPECIES
Paciphacops campbelli
AGE
Lower Devonian