What is the largest Megalodon tooth ever found?

Fossil Megalodon teeth are relatively common in some areas of the world, such as the coastal regions of the SE United State. Most adult Megalodon teeth fall into the 4-5 inch size range. As teeth approach 6 inches they become rare, representing far less than 1% of teeth. These 6 inch teeth obviously represented extremely large individual sharks.

Very few Megalodon teeth have ever been found exceeding 7 inches. Many people who have spent their lifetime’s finding and collecting Megalodon teeth have never had their hands on a 7+ inch tooth. Determining what is truly the largest Megalodon tooth found is problematic, because just like with fishing, people like to exaggerate. There’s a million stories about that 7 ½” or 8" tooth that someone found, but for some reason disappeared, never to be seen again.

Large Megalodon teeth can be very valuable, so there is a huge incentive to “enhance” a tooth, often artificially lengthening it.  One of the last high quality, non-restored Megalodon teeth over 7 inches sold for around $50k. You never know the true size of these restored/enhanced teeth. These large teeth are so valuable this also causes to “old-time” collectors being very hesitant to disclose large teeth in their collection, out of fear of inviting thieves.

Separating out some of the obvious fish tails, one of the best candidates for the largest Megalodon had been a massive tooth found by the late Vito Bertucci in South Carolina and now in the collection of Dr. Gordon Hubbell. This tooth purportedly measures  between 7 1/4" and 7 3/8”, although no exact caliper readings are available.

Another tooth that was often cited as the record holder, was a large specimen collected by Pete Larson of the Black Hills Institute from Peru.  This tooth measured in at around 7 1/4", but had been found broken and was repair and gaps restored.  The resulting root was appeared highly elongated compared to other Megalodon teeth, leading many to question whether this restoration work caused the tooth to be artificially lengthened.

Recently photos and verifiable measurements have surface on another monster tooth from Ocucaje, Peru.  It measures 190mm or 7.48" on the slant it resides in a private collection in Peru.  It was photographed, measured and casted by Craig Sundell, a researcher for the University of Kansas back in the 90's.  The tooth is not a composite and has not been restored.  There is a repaired crack in the tooth because it was found broken, but it's a clean break.  The discoloration on the root is residue from casting material, not restoration. 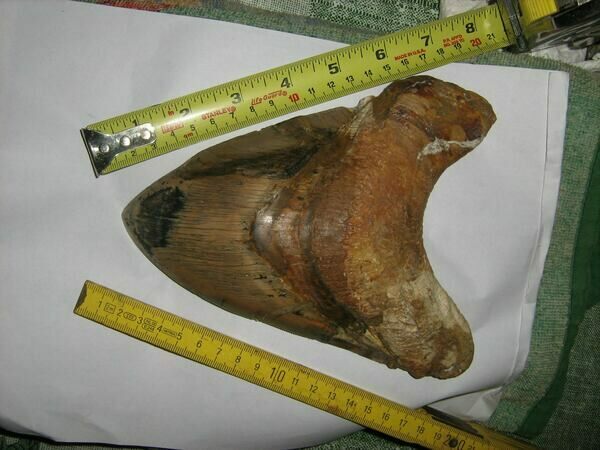 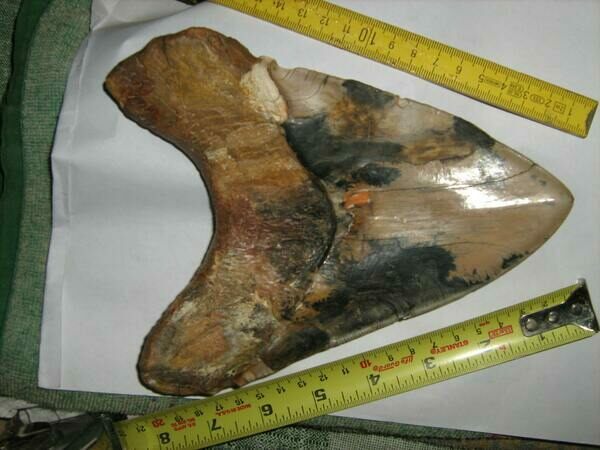 View of the back of the largest verifiable Megalodon tooth.


Rumors to slightly larger teeth in the collections of locals in Peru persist, including one reportedly 192mm or 7.55"  This region of Peru has produced the largest known Megalodon teeth.  One reason being is that it likely represented a deeper water environment with larger food sources where the super-sized Megalodon's would be hanging out.  It's illegal for fossils found in Peru to leave the country, so don't expect to see the gigantic teeth from this location up for sale. 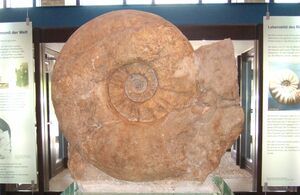 What Is The Largest Ammonite Ever Found?