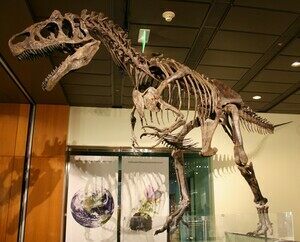 Mounted skeleton of "Big Al" at the Houston Museum of Natural Science
was a theropod of the Late Jurassic that lived from 156 to 145 million years ago. It was a predator with a massive skull, serrated teeth, and gaping jaws. Allosaurus had brow horns which appear to have varied somewhat in shape between individuals. This powerful and plentiful carnivore genus could grow to almost 39 feet long.

The abundance of Allosaurus skeletons has provided scientists with evidence to propose behavior. Allosaurus may have used hunting strategies such as flesh grazing, pack hunting, and ambush attacks that utilized trachea crushing bites. It likely grasped its meal with its legs and mouth and pulled its meal apart. Its unusual gaping jaw has spurred debate regarding Allosaurus using its head like a hatchet to attack and slice at prey. There is also taxonomic controversy regarding what species belong to Allosaurus.