Fossils
Clearance Lots
HERE ARE SOME OTHER SIMILAR FOSSILS FOR SALE 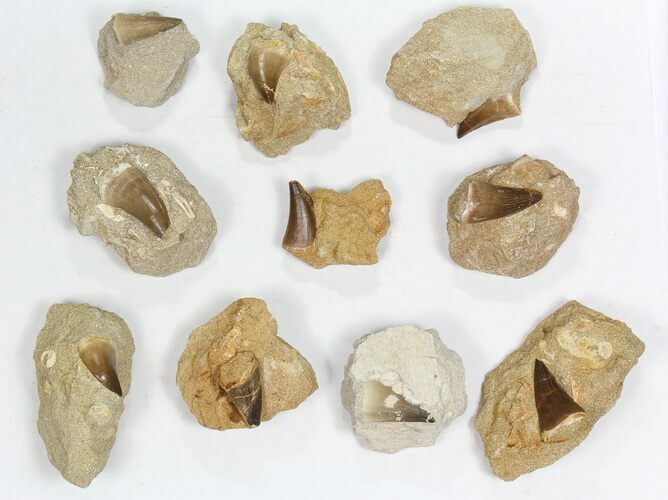 This is a wholesale lot containing 10 fossil Mosasaur teeth all still partially embedded in the rock they were found in. They are Late Cretaceous in age from the Oulad Abdoun Basin in Morocco.

The teeth in this lot are primarily from the genus Prognathodon and the teeth measure 1-2" long with most being in the middle of that range. A few of the teeth have repaired cracks and/or have been remounted on the rock they came loose from during collection. The rocks frequently contain other fossils including fragments of bone, fish vertebrae and sometimes other teeth. You will get the lot of teeth pictured.

These teeth are collected as a byproduct of the massive phosphate mining operations near Khouribga. The locals collected the teeth and other fossils saving them from certain destruction by rock crusher. There are as many as 10 different species of Mosasaurs in these deposits, and determining the species of individual teeth is often difficult. A tooth morphology guide is linked below.

Tooth morphology of mosasaurid species from the Maastrichtian Phosphates of Morocco.

Although Mosasaurs diversified and proliferated at a spectacular rate, their specialization is considered the source of their demise when marine systems collapsed at the end of the Cretaceous.
More About Mosasaurus & Mosasaurs
View Jurassic World Fossils
SOLD
DETAILS
SPECIES
Prognathodon sp.
AGE
Late Cretaceous (~70 Million Years)