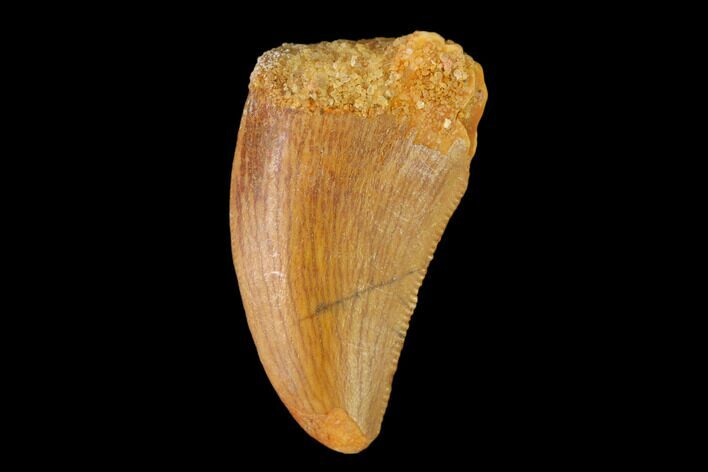 This is a .94" long tooth of a juvenile/baby Carcharodontosaurus from the Late Cretaceous, Kem Kem Beds of Morocco. Carcharodontosaurus was a massive predatory dinosaur that reached sizes larger than that of Tyrannosaurus rex, though this tooth would have come from a juvenile with much smaller teeth.

Past the Turonian (93.9-89.8 mya), Carcharodontosaurus might have been replaced by the smaller abelisaurids in Gondwana and by tyrannosaurids in North America and Asia. The disappearance of carcharodontosaurids, spinosaurids and other fauna in Gondwana and across the world, suggests a global replacement event. Despite the event, fossils discovered in Brazil which appear to be carcharodontosaurids, indicate some survivors of this group until the latest stage of the Cretaceous.
View Jurassic World Fossils
About Dinosaur Teeth
SOLD
DETAILS
SPECIES
Carcharodontosaurus
AGE
Late Cretaceous (95 million years)