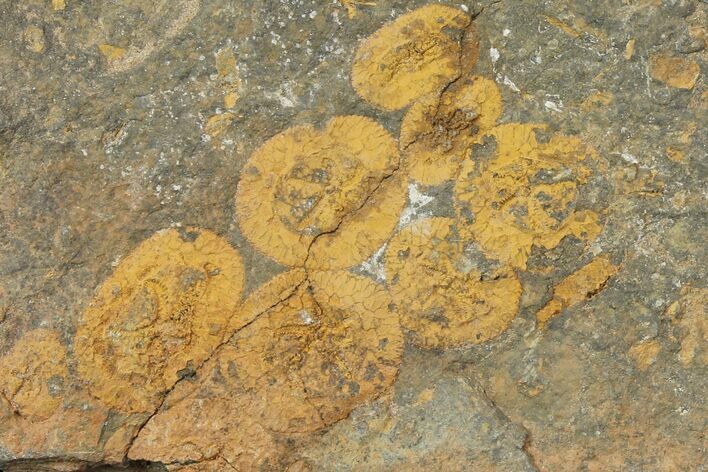 This is a cluster of nine Edrioasteroid (Spinadiscus lefebvrei) fossils from the Ktaoua Formation of Morocco. The orange coloration is natural and due to the oxidization of iron pyrite which originally replaced the fossils. These edrioasteroids would have originally been attached to something which is not preserved which accounts for their arrangement in a rectangle. There is one repaired crack running through the cluster.

Edrioasteroids are an extinct class of echinoderms. Distantly related to starfish and sea urchins, they have a body laid out in a pentaradial pattern. They also had a water vascular system and a skeleton made of calcite plates. They were filter feeders who lived permanently attached to an object or the seafloor. Some are thought to have had short stems like crinoids but most lived flat on whatever object they had attached to as larva. Edrioasteroids appear in the Cambrian Period about 515 million years ago. They zenith of their diversity during the Late Ordovician Period. By about 275 million years ago, during the Permian Period, Edrioasteroids are extinct.

Edrioasteroids were small organisms from a few millimeters to a couple centimeters wide. They look like a tiny cushion attached to a substrate. The mouth was in the center of the theca (body) and from it, five ridges radiate out in a pentaradial pattern. These ambulacra channel food along the body to the mouth. There is little fossil evidence of how this was done, but by looking at modern echinoderms, it is likely Edrioasteroids had cilia or tube feet along the ambulacra that moved the food to the mouth. The ambulacra radiate out from the mouth in either straight lines or curving to form a whorl. Usually they all curve in the same direction but in a few species the curve in different directions.
FOR SALE
$75
DETAILS
SPECIES
Spinadiscus lefebvrei
AGE
Ordovician