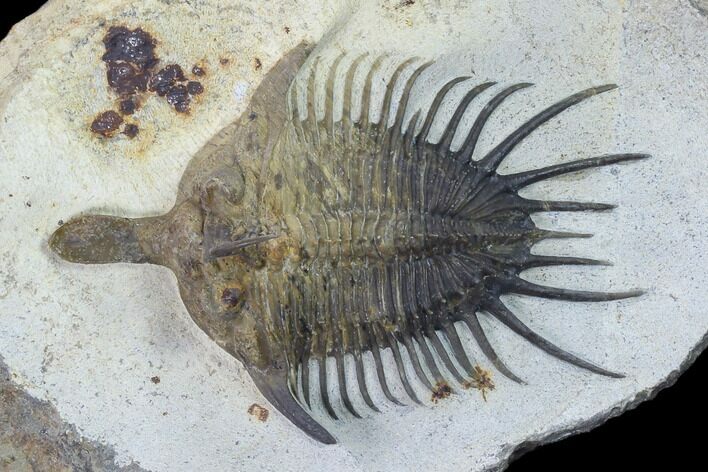 This is a 3.3" long Psychopyge trilobite quarried near Ofaten, Morocco. It has several unique and interesting features to it.

First the shell is naturally multi-toned transitioning from tan to black along the length of the trilobite. These multi-toned colorations are sometimes seen on trilobites from the site and it's due to part of the trilobite being closer to a fault in the rock which allows groundwater or hydrothermal fluids to leach minerals from the shell.

Secondly this type has an extremely long occipital spine and shorter rostrum than other species.

Third the genal spines are much shorter on this specimen. It looks like both show signs of healed injuries.

Trilobites were a very diverse group of extinct marine arthropods. They first appeared in the fossil record in the Early Cambrian (521 million years ago) and went extinct during the Permian mass extinction (250 million years ago). They were one of the most successful of the early animals on our planet with over 25k described species, filling nearly every evolutionary niche. Due in large part to a hard exoskeleton (shell), they left a excellent fossil record.
FOR SALE
$1,095
DETAILS
SPECIES
Psychopyge sp.
AGE
Middle Devonian