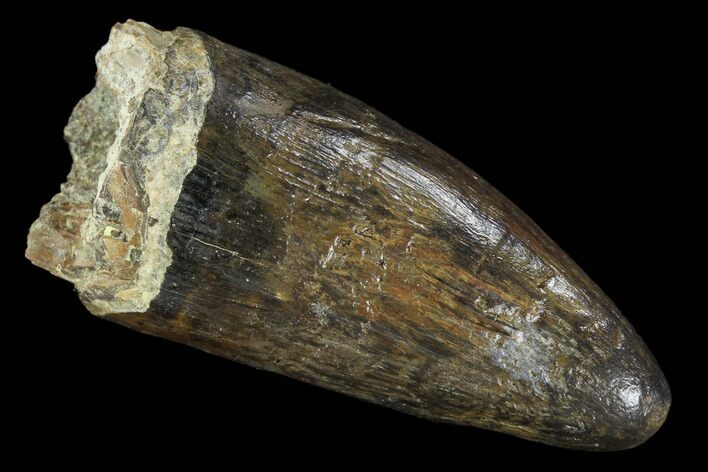 This is an amazing 1.9" long fossil crocodile (Deinosuchus) tooth from the Aguja Formation of Texas. It is in outstanding condition and shows very little wear. There is a small amount of enamel restoration near the tip.

Deinosuchus whose name translates to "terrible crocodile" is an extinct alligator that lived during the Late Cretaceous. Deinosuchus would have been an apex predator of it's time, and fragmentary evidence indicates it may have reach absolutely gigantic sizes of up to 50 feet in length. Deinosuchus fossils have been found in 10 US states, including Texas, Montana, but more frequently along the east coast, though the western species grew much larger. It would have had a body shape fairly similar to modern crocodiles and likely preyed upon the dinosaurs present in it's habitat. It likely had a bite force far in excess of even T-Rex.

This specimen was collected within the past year on private deeded property in Brewster County, Texas. You won't see any other dinosaur material from the Aguja & Javelina Formations for sale because nearly all of the formation lies within the boundaries of a national park or in Mexico which can not be collected. One of our partners was lucky enough to purchase several hundred acres of ranch land in Texas containing a good exposure of these formations and we will be offering more material from the locality in the future.
SOLD
DETAILS
SPECIES
Deinosuchus riograndensis
AGE
Late Cretaceous, Maastrichtian Stage