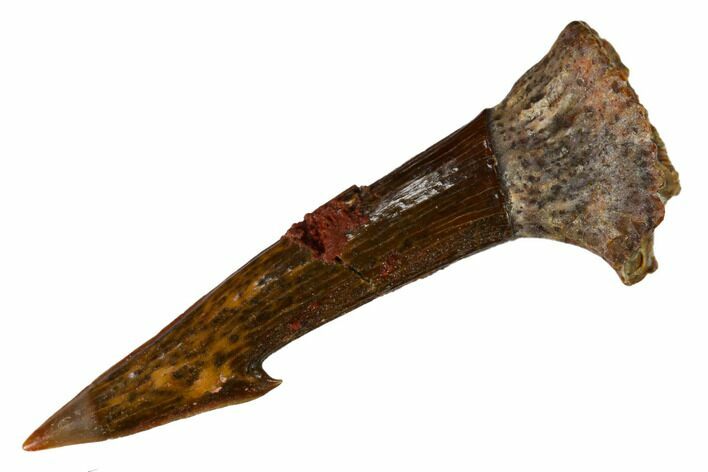 This is a a 1.4" long rostral barb/tooth from an extinct, giant sawfish (Onchopristis numidus). There is one repaired crack in the barb.

Onchopristis, or “giant saw”, is a genus of extinct giant sawfish that lived in the Upper Cretaceous (ending 65.4 mya) in or near North Africa. It had a long hard shovel-shaped snout called a rostrum. The saw-like rostrum, lined on both sides with modified tooth-like structures called denticles, were hooked and barbed. Onchopristis had an intimidating, 2.5 meter long rostrum which it would have used to unearth crustaceans at the bottom of shallow waters like sawfish do today.


We know that for the modern sawfish, the rostrum is covered with electrosensitive pores that allow the sawfish to detect slight movements of prey hiding in the muddy sea floor. The rostrum also serves as a digging tool. Should suitable prey try to swim past, the normally lethargic sawfish springs from the bottom and slashes at it with its saw.

Sawfish also defend themselves with their rostrum against intruding predators such as sharks.